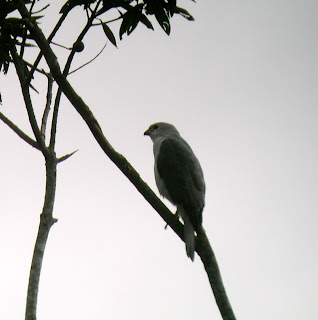 We had a good Birding Cairns club outing today, with 19 people to share it. We met outside the front gate of Kingfisher Park (just over 200m a.s.l.) at 0730hrs because that is where the sun hits at that time of day. And we needed the sun after a cold foggy Tablelands morning. Keith Fisher met us there and much socialisation began but good birding soon eclipsed that.

We stopped here and there up the long, winding road to Mt Lewis (about 100m a.s.l.) seeing or hearing Noisy Pitta, White-throated Treecreeper, Spotted Catbird, Mountain Thornbill, Bridled Honeyeater, Chowchilla, Eastern Whipbird, and Grey-headed Robin along the way. The pitta and many calling Yellow-breasted Boatbills were a feature of the lower slopes while all the remainder were in the upper half of the mountain.
Around the top clearing were many Bridled Honeyeaters and Mountain Thornbills calling but very few new species. A few Eastern Spinebills. one Yellow-throated Scrubwren, one White-cheeked Honeyeater, and one Grey Fantail. It was very dry underfoot with a cold wind. Most of the group walked up the left side track and saw one Wompoo, one female Golden Bowerbird, one Fernwren, and one Atherton Scrubwren in the first 300m. After that there didn't seem to be much at all.
To make up for the lack of birds on top a few of us called into K Park on the way home and saw the Owlet-nightjar perched in its little stump-hole by Geraghty Park (thanks Keith for that), and David Anderson and I saw a probable Little Eagle slipping away over the trees south of Lake Mitchell, and stopped at Marsh's Marsh a little north of Mareeba to spot a Yellow-billed Spoonbill on a dead tree.
Andy A.
Next month, August 16, 0630 hrs, Wongabel SF, not far south of Atherton.
Then, from Aug 21 to Sept 6, a solid itinerary of daily birding activities; q.v. at www.festivalcairnsbirding.blogspot.com
posted by Cairns Birds  # Sunday, July 19, 2009